A record 925 attendees descended upon New Orleans for the Association for Applied Sport Psychology's 28th Annual Conference , held October 2-5.  The conference is one of AASP's core initatives and the goal is always to pull together into dialogue, not only research and practice, but also researchers and practitioners, the young and the established.  What follows is a brief overview of the invited keynotes and lectures from my vantage point. 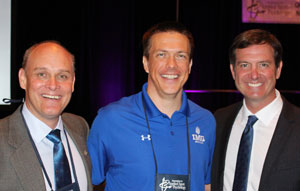 Kate Hays delivered the Coleman Griffith Lecture.
Kate is a practicing clinical sport psychologist from Canada. In her address, Kate generously shared with the audience her "journey as an independent scholar – practitioner". The delivery was refreshing. We all admire Kate for all she continues to do for AASP, and in her address, what stood out was her openness and introspection. Effective scholars – practitioners are highly reflective in their practice. Kate provided a wonderful example for those in attendance of the length of self-awareness and compassion needed in order to connect with a client. The journey always starts by looking at oneself and one's origins.

Craig Jenkins and Gary Denham presented the Performance Psychology Keynote. These two energetic presenters
provided the audience with in-depth information about a high performance context that has gained our attention over the past few years at AASP. The idea of military performance is becoming a familiar topic at our conference, though also within the broader profession. As those in attendance noticed, there were many members representing the Armed Forces, Marines, and the Central Training Headquarters. Our very own recently minted President is one such member, helping the membership take note of the growing employment opportunities in this emerging sector.The presenters provided a captivating 90 minutes of information in terms of the psyche needed to be a special operations tactician – clearly a high-performance athlete of sorts. The hardships and resilience of these performers were brought to life, as the presenters described the sleep deprivation, excessive heat and cold, fear, and life and death decision-making skills required. We also gained entry into the broader life challenges of special operations tacticians. As I sat and listened to what was shared, it became abundantly clear that the military has become a friend to AASP, supporting out expansion through job opportunities and also through a broader understanding of what constitutes performance and how best to work within this emerging market. 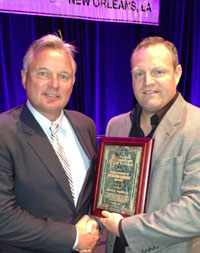 Morten Andersen was the first recipient of AASP's Performance Excellence Award. The award was envisioned by Jon Metzler, and launched at this year's conference.As Jon introduced the award, I had to agree, not only does this cutting edge initiative benefit AASP's conference program and the association, there could not be a better inaugural recipient of the award than Morten. Morten spoke of his experiences in the National Football League and how he integrated skills garnered through a long-term consulting relationship with our founding AASP President, John Silva. Listening to Morten, there were several takeaway messages. One of these is that it is hard for consultants to break into the various professional sport opportunities that abound, worldwide. However, once a highly competent practitioner does break in, opportunities open up, not only for the growing of one's consulting roster, but also for the possibility of long-term consulting relationships.

Jacquelynne Eccles delivered the Social Psychology Keynote. Dr. Eccles is a well-respected international scholar in social psychology from the University of Michigan. During her presentation, the audience became acquainted with the adaptive and mal-adaptive behaviors of secondary school students, both the active and inactive. The presentation was an opportunity to follow Dr. Eccles' scholarship over several decades, in the United States and also through international collaborations with colleagues in Australia. From what was presented, the audience was able to follow students from high school, through their university careers, onward to post-graduation. What resonated with me was that athletics paired with additional extracurricular activities in high school seems to be the most adaptive pathway, longitudinally, to a psychologically healthy life. One would discern from this presenter's work that a balanced life is healthiest, and that a balanced adaptive pattern should be embarked upon and rooted in early in life. The feedback regarding Dr. Eccles from those in attendance during the final banquet was that we need more of this level of keynote going forward in order to balance our associations practice with further academic heft.

John Ratey from Harvard University was the invited Health and Exercise Psychology Keynote. He presented his research about the importance of physical activity throughout each day over the lifespan. During the presentation it became abundantly clear the benefits derived from physical activity during each day of one's life. For children and youth, these experiences are not only an outlet for energy; they also encourage creativity, engagement, and concentration. For adults and seniors, physical activity prolongs youthfulness well into one's golden years. Research was also presented about the benefits of physical activity for people struggling with depression and with a broader spectrum of mental illnesses. Walking away from the presentation, as a researcher focused mostly on elite sport topic matter to this point, I began to see various possibilities where my interests could intersect with several other AASP members interested in exercise psychology. The view of the membership was that this keynote revealed just how research and practice can be bridged.


Jaume Cruz was the Distinguished International Scholar. Jaume spoke of nearly three decades of research about coaching behavior, with his earliest work guided by the well-known Coaching Behavioral Assessment Tool. 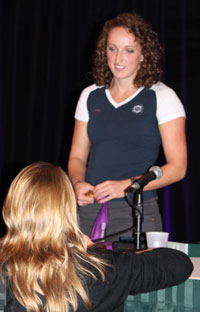 Claire Donahue, her collegiate coach Bruce Marchionda, and Betsy Shoenfelt, a certified consultant who has helped Claire maximize her athletic performance. The group discussed the relationship between swimmer – coach – sport psychologist and the integration of mental skills exercises into Claire's overall training. They shared a unique, detailed account of Claire's experience at the 2012 Olympic Trials where she successfully made her first US Olympic Team.

We have a new and energetic President in Jon Metzler. For those in the audience listening to Jon's words during his President's Address, we were witness to a fresh perspective that I believe will further connect the generations of AASP's membership. Jon spoke about social media and the importance of modernizing AASP. As I move into my second year working with him, I become increasingly aware that one of the best ways to grow AASP is through social media and by technology. Jon also spoke of the importance of a much broader perspective of sport psychology, with more focus on performance psychology given the opening up of jobs for today's young professionals in this emerging market. At a more basic level, it was readily apparent that John is a kind and caring leader and that he has a youthful energy that will serve the association well in the coming year. Personally, I cannot wait to see Jon in action as he begins his office.

Jack Watson closed the book on his year of leadership to AASP, as always, with grace and dignity. He spoke of the many initiatives that the E-board and various committees engaged in this year. The list of accomplishments he listed was long, revealing of a productive tenure 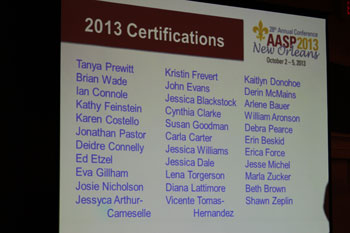 and much added value for the membership. A few of these initiatives were brought forward to the Fellows Committee, including an appeals
process for CC-AASP applicants and also a more defined classification system for CC-AASP members that is inviting of re-engagement for those with lapsed status. Robert Harmison delivered these proposals to the Fellows, and both became policy. Jack's tireless work throughout the various conference meetings, in my view, only deepened the interpersonal ties within the association as members felt their fingerprints and voices in all that he led.

On behalf of AASP's leadership, and also as a member of our association, thank you – each one of you in attendance, for making this conference, in my view, the most engaging to date.