The end of the 2014 AASP conference in Las Vegas was a bittersweet one for me as it ends my four-year involvement with conference programming as Scientific Program Division Head. It has been an honor and a privilege to work with a number of Past Presidents to help plan the annual conference during a time of tremendous growth for AASP. Following the 2011 conference in Hawaii, attendance has increased every year, culminating with record numbers of both attendees (1,156) and conference submissions (486) in 2014. Both areas of growth shattered the previous records set in 2013 by more than 23%. An unanticipated cost of record attendance in Las Vegas was members finding standing room only across a number of breakout sessions. 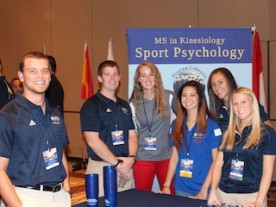 The 2014 conference was also a conference of firsts with the addition of a third poster session (over the lunch hour on Saturday) and the introduction of the Five Slides in Five Minutes (5-in-5) presentation format sessions. Based on the popularity of both, these initiatives will likely be a part of the 2015 conference in Indianapolis. The 5-in-5 presentations were developed by Jack Watson to accommodate members' requests for more interactive discussion-based sessions. During each session that focused on one of three general areas (Taking the Sport Psychology Brand Public, Best Practices in Consulting, and SIGS), presenters were given five minutes to discuss five slides on a specific topic. Following every three presentations, the audience was given 15 minutes for questions, and the process repeated.

Like all AASP conferences, this year's program was highlighted by a number of exemplary keynote and invited presentations, starting with Keith Henschen's delivery of the Coleman Griffith Lecture. Henschen reminisced on his 45 years of work with athletes, including 33 years with the Utah Jazz. Gems attendees were able to take home included insights into the mindsets of "Great Ones" and their hatred of losing, the cardinal skills of practice, and the recommendation to develop a "Utopian Society" or network of practitioners with whom to share best practices on a regular basis. Possibly the most important revelation Keith offered was that if he could do it all over again, he would have spent more time with his own kids. 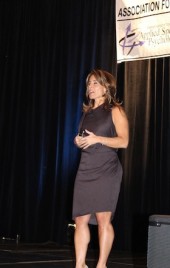 The theme of seasonal or work/life balance continued with Kimberley Amirault-Ryan's Thursday keynote, as she shared her experiences as afemale practitioner working with the Canadian Olympic Committee, the New York Knicks, and multiple NHL franchises (e.g., York Rangers, Columbus Blue Jackets, Edmonton Oilers). Her talk included expert advice to practitioners on the realities of working in professional sports where virtually everyone is "hired to be fired" and the need to practice what we preach by not paying too much attention to people in the stands. From her recollection of her surreal first day on the job with the New York Rangers on September 11, 2001 to her touching story about Theo Flurry and his personal feelings of failure, Kimberley gave attendees a glimpse of the realities of life as a practitioner at the highest level of sport.

Edward Deci motivated the audience with a focus on self-determination theory in the Friday keynote session. His talk included a review of the key tenets of self-determination theory and numerous recommendations for utilizing the theory to provide optimal motivation for sport, physical activity, and wellness initiatives. The importance of creating need-supportive environments that enhance autonomous motivation clearly came through the research examining the impact of reward systems on autonomy, competence, and relatedness. 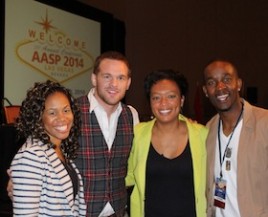 Brett Smith focused the Diversity Lecture on what sport psychology could learn from including disability. Smith highlighted that disability is a form of social oppression and focused on the problems of defining disability through a disabling medical model. He encouraged practitioners and researchers to utilize a social relational model to define disability as it defines problems within society rather than within the individual. As part of his talk, Smith focused on the importance of narratives, a theme that re-appeared in the Diversity Panel with Angela Hucles, Wade Davis, and Hudson Taylor as they repeatedly emphasized the power of language and narrative discourse. The panel offered the most powerful dialogue I have heard at an AASP conference when Wade Davis revealed he was so worried his teammates would notice he was gay from watching him running on film that he could not incorporate the technical feedback he was receiving from teammate Champ Bailey. 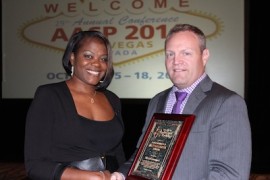 Sheryl Swoopes was the second recipient of the AASP Performance Excellence Award. Swoopes' acceptance speech was built around her personal pillars for success - determination, focus, perseverance, hard work, and sacrifice. During the talk, Swoopes acknowledged that she worked with a psychologist during her playing career with the Houston Comets and received quite an ovation when she stated that she believed sport psychology professionals should be mandatory in all universities. The most entertaining part of her speech may have been the story of her fabricated 4:25 mile time leading into the 1996 Olympic Training Camp for the U.S. Women's basketball team. In her defense, Google search was not a common companion back then, so Swoopes did not realize she would have only been 9 seconds off the American women's mile record at the time.

Anne Marte Pensgaard gave a perfect illustration of evidence-based practice in the International Lecture, as she outlined how she incorporates her motivational climate research and other theoretical evidence into consulting with Olympic athletes. A powerful theme that came through Pensgarards's talk was the need for sport psychology professionals on site at the Olympic venues as identified through the angst that takes place when favorites have not won gold four days into an Olympic Games. This theme was reiterated in the Performance Psychology Panel as Alan Ashley, Sean McCann, and Gloria Balague discussed the heightened stress experienced by coaches and administrators alike at the Olympic Games. The panel discussion identified sport psychology as a cog in a comprehensive integrated approach to performance enhancement that takes place within the United States Olympic Committee. Interestingly, Ashley indicated that it is hard to quantify the success of sport psychology outside of coach and athlete feedback, illustrating the need to continue to discuss best practices in assessing and quantifying success of sport psychology practitioners.

Finally, the conference marks a transition for AASP Presidents. Jack Watson concluded his Past Presidency by planning a wonderful 2014 conference in Las Vegas. Even though Jack's Presidential period has passed, his focus will remain on moving forward the Future of Certification Ad Hoc Committee. Jon Metzler concluded his Presidency with a strong emphasis on further defining the field of sport psychology and branding the organization. Rob Schinke shared his vision in the Presidential Address and challenged AASP to become a global leader by establishing international regional conference partners, deepening international connections, and extending our domain to worldwide organizations through outreach. As Las Vegas has come to a close, it is now time to turn our attention to the possibilities and highlights ahead in Indianapolis in 2015. I believe Jon Metzler has already put on his conference planning hat, so we should be in for another great conference next year.