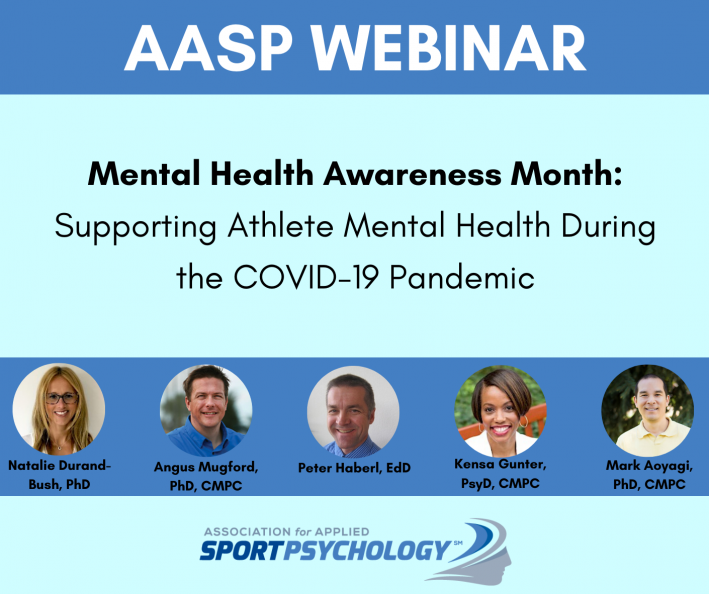 This webinar is being offered free of charge to sport psychology professionals.

Overview
Join AASP’s panel of experts to learn about how COVID-19 has affected sport and tips for providing support for athletes during this time. Speakers will discuss the challenges athletes are facing during the pandemic, how sport organizations have adapted schedules and programs in the wake of the crisis and the important role of mental performance and mental health during this time of uncertainty. They will also share first-hand accounts of athletes, coaches and sport organizations who are successfully navigating this new normal to stay motivated and supportive of the sports community as well as resources to better support athletes during the coronavirus pandemic and adjustment period.

Program Format
The webinar be held on Zoom up to the first 100 guests then streamed on Facebook Live. Registrants will be provided with login information the day prior to the session. The webinar will also be archived for those who wish to watch it at a later date. *This activity is not being offered for CMPC® recertification or APA credit.

Natalie Durand-Bush, PhD
Dr. Natalie Durand-Bush is a sport psychology professor, scientist, and practitioner in the School of Human Kinetics at the University of Ottawa in Ottawa, Canada. Her areas of specialization include psychological skills training and assessment, mental health, and coaching psychology. Natalie is the Director of the SEWP LAB and the co-founder of the Canadian Centre for Mental Health and Sport - a specialized Centre offering collaborative sport-focused mental health care services to high-performance athletes and coaches. As a Mental Performance Consultant for the past 25 years, Natalie has helped amateur and professional athletes and coaches of all ages, sports, and levels achieve their performance and well-being goals. A relentless advocate for the field of sport psychology, she has co-founded and chaired the Canadian Sport Psychology Association (CSPA) and has served as the Vice-President of the International Society of Sport Psychology (ISSP). Natalie is currently the President of the Association for Applied Sport Psychology (AASP) and an AASP Fellow.

Kensa Gunter, PsyD, CMPC
Dr. Kensa Gunter is a licensed psychologist and a Certified Mental Performance Consultant® (CMPC) through the Association for Applied Sport Psychology (AASP). In her Atlanta-based private practice, she works with athletes providing individual counseling and sport psychology services. She has worked with athletes from individual and team sports competing at high school, collegiate, and professional levels. Dr. Gunter also provides consultation services to local organizations and serves as the clinical sport psychologist for a Division-I athletic department and local professional sport organizations. Dr. Gunter received her Psy.D. in Clinical Psychology with a concentration in Sport Psychology from Argosy University/Phoenix in 2006. She completed her internship and postdoctoral fellowship at the University of California in Davis. She also holds a Master’s degree in both Clinical & Forensic Psychology and a Bachelor of Science degree in Psychology.

Dr. Gunter is passionate about helping people, particularly related to enhancing mental performance and decreasing the stigma around mental health. She is an advocate for cultural diversity and for being more intentional about inclusion in the context of sport and society. She served as Division 47’s invited speaker for the Steven R. Heyman Memorial Keynote Lecture at the 2018 APA Convention. Within AASP, she presently serves as a member of the Diversity Committee and has previously served on the Certification Review Committee, the Interim Certification Council, and she was the Coordinator for the 2017 AASP-HBCU Regional Conference. Dr. Gunter is also listed on the United States Olympic Committee Sport Psychology Registry.

Angus Mugford, PhD, CMPC
Dr. Angus Mugford is Vice President of High Performance for the Toronto Blue Jays. This department is one of the first in Major League Baseball to exclusively focus on the holistic support of the development and performance of players, coaches and staff. Mugford oversees the integration of an interdisciplinary performance team, including sports medicine, strength and conditioning, mental performance, and nutrition with a sport science-based approach. He came to the Blue Jays from IMG (International Management Group), where he had served for more than a decade, leading their external consulting through the IMG Institute. There, he developed programs and oversaw mental conditioning and performance programs as part of IMG Academy, for professional and junior athletes and coaches, as well as US military special operations and executives. Mugford has a PhD from the University of Kansas and in 2015 he was elected by his peers as the president of the Association for Applied Sport Psychology (AASP). He is a Certified Mental Performance Consultant® (CMPC) with the Association for Applied Sport Psychology (AASP), was accredited for sport psychology support with the British Association of Sport & Exercise Sciences (BASES), in addition to holding chartered status with the British Psychological Society (BPS). Angus has authored many academic and professional publications, presented at conferences across the globe, and has a track record as a consultant on mental performance, leadership, culture change, and human performance teams. Mugford is originally from the United Kingdom, but now lives in Florida with his wife, Sarah, and their sons, Will and Tom.

Peter Haberl joined the United States Olympic Committee in 1998. In his current position as senior sport psychologist, he provides individual and team consultations and counseling sessions to various resident and national team athletes with a specific specialization in team sports. Haberl has enjoyed the privilege of having worked at eight Olympic Games, four Pan American Games, and one Paralympic Games with U.S. athletes. Prior to joining the Olympic Movement in the U.S., Haberl played professional ice hockey in Austria. Born in Austria, Haberl received his bachelor’s degree in sports science from the University of Vienna, Austria. He later earned his master's degree in counseling and his Ed. D. in counseling psychology at Boston University. A licensed psychologist, Haberl focuses on mindfulness-based interventions.

Mark Aoyagi, PhD, CMPC
Dr. Mark Aoyagi is the Director of Sport & Performance Psychology and Professor in the Graduate School of Professional Psychology at the University of Denver. He is also the founder of the Center for Performance Excellence. His areas of expertise include performance excellence, team effectiveness, and achieving meaning, satisfaction, and fulfillment through sport, work, and life. Mark is a recognized sport psychology consultant and has worked with several professional and Olympic teams and athletes as well as NCAA athletic departments and developmental athletes. He is a licensed psychologist in the state of Colorado, a Certified Mental Performance Consultant® (CMPC) through the Association for Applied Sport Psychology (AASP), and is listed in the United States Olympic Committee (USOC) Sport Psychology Registry. Mark is active in several professional organizations including the International Society for Sport Psychology, American Psychological Association (APA) and AASP. He was elected to the Executive Board of AASP as the Research and Practice Division Head (2014-2017), appointed Chair of the Graduate Program Committee (2013-2014), and selected as a member of the Distinguished Professional Practice Award Committee (2014), Future of Focus Areas Ad Hoc Committee (2012-2014), Foundation Committee (2012-2014), and Student Development Committee (2007-2010). In addition, he was selected as a subject matter expert for the job task analysis conducted by AASP. For APA Division 47 (Society for Sport, Exercise, & Performance Psychology), Mark was elected as Member-at-Large on the Executive Committee (2011-2013), appointed Chair of the Science Committee (2010-2012), and served as member of the Public Interest Committee (2008-2012) and member of the Practice Committee (2008-2014). Mark has several publications and national conference presentations on the topics of sport psychology, team effectiveness, models of sport psychology practice, and ethics among others. He has co-edited two books: Expert Approaches to Sport Psychology (with Artur Poczwardowski) and The Peer Guide to Applied Sport Psychology for Consultants in Training (with Artur Poczwardowski and Jamie Shapiro). Mark has been an invited speaker for several professional teams and college athletic departments in the United States as well as internationally for high-performance groups in Canada, Poland, Mexico, Italy, and New Zealand.

Mark earned a Ph.D. in Counseling Psychology with an emphasis in Sport Psychology from the University of Missouri in 2006 and was the Sport Psychology Post Doctoral Fellow at the University of Southern California. Prior to that, he completed a B.S. in Exercise and Sport Science and a B.S. in Psychology from the University of Utah in 1999 and a M.S. in Kinesiology, Sport Psychology emphasis from Georgia Southern University in 2001. Mark also completed a Graduate Business Certificate in Management from the University of Denver Daniels College of Business in 2011. He was the recipient of the 2005 Student-Practitioner Award from the Association for the Advancement of Applied Sport Psychology for excellence in applied sport psychology and the inaugural Early Career Professional Award from Division 47 (Exercise and Sport Psychology) of the American Psychological Association in 2013. He was appointed a Fellow of AASP in 2016, a recognition for members who have achieved distinction through significant contributions to academic and professional practice knowledge in sport psychology. He was appointed an APA Fellow in 2020, a designation bestowed upon APA members who have shown evidence of outstanding contributions to the field of psychology. Mark played rugby, football, baseball, and wrestling competitively, and now enjoys a variety of recreational sports and outdoor activities.