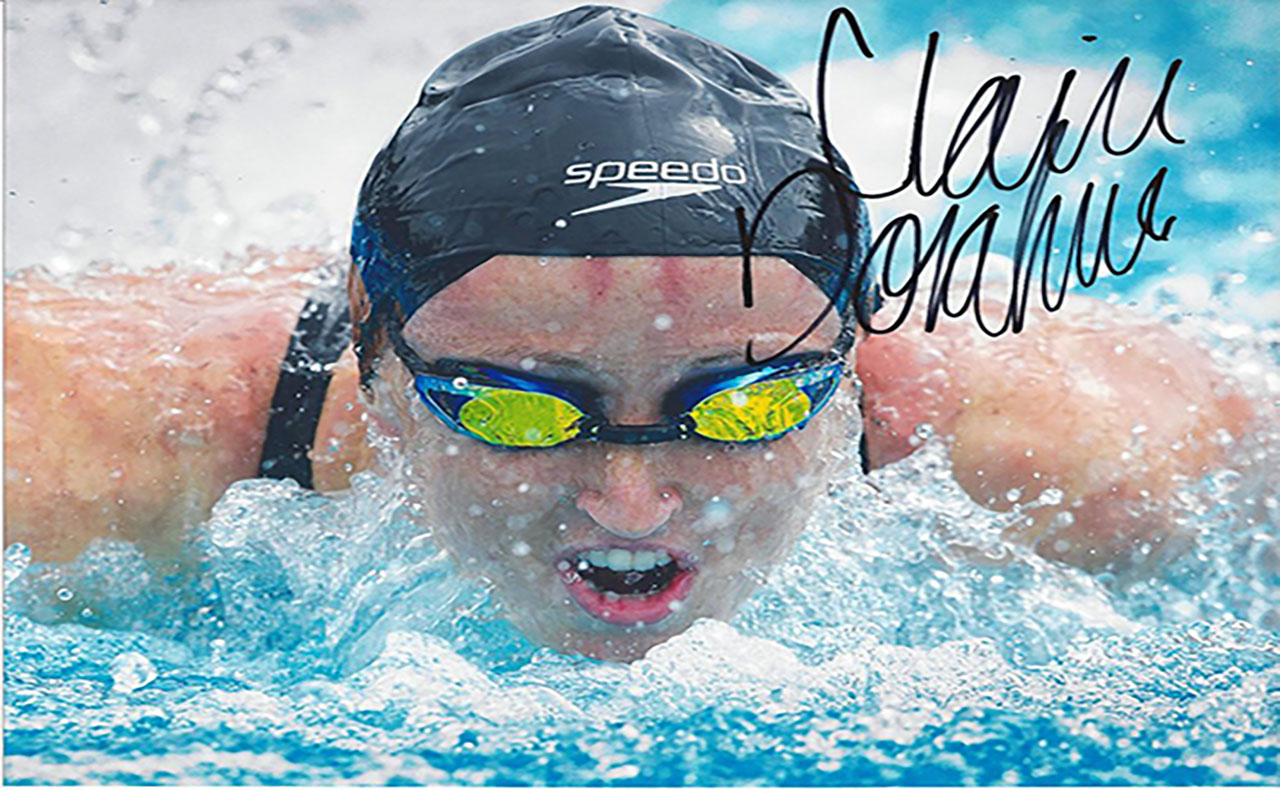 Western Kentucky University graduate Claire Donahue set many records as a swimmer for her NCAA Division I school. Today she is a member of the USA Swimming team competing internationally, as well as an Olympic Gold Medalist. She credits some of that success to the mental skills training that carried her through the Olympic Trials to where she is today.

The Tennessee native had been swimming for 17 years and had never worked with a sport psychologist until she was looking for an extra advantage as she started to prepare for the 100-meter butterfly at the USA Olympic Swimming Trials in 2012. “Four years earlier, when I swam at the Olympic Trials, it was extremely nerve-wracking and it actually hindered my time and my place a little bit,” explained Donahue. “I’ve really been working on controlling my nerves and it was the suggestion of my coach that I start working with sport psychology consultant Betsy Shoenfelt, Ph.D., who is a professor of psychological sciences at Western Kentucky University,” said Donahue.

“At this level when the difference in making the team is hundredths of a second, we were looking for anything that would give Claire an edge,” said Marchionda. “I think it was priceless for her to be able to work with Betsy Shoenfelt on being able to handle anything that might come along like a sub-par performance at a race, an audience of 13,000 people, the pressure of making the team and the journey to get there with all the hard work-outs. The different perspective and mental rehearsal for the race helped so much and by the time Claire got to the race she had already done it hundreds of times in her mind. It was great to have Betsy as part of our staff—she was excellent.”

Developing the Mental Edge
“I have worked with WKU athletes and coaches teaching mental toughness skills and team building for the past 30 years,” explained Shoenfelt, who is a Licensed Industrial/Organizational Psychologist, and CMPC. “My training is in Industrial/Organizational Psychology with a Sport Psychology second emphasis and in both areas, I have a performance orientation rather than a clinical or counseling orientation.”

According to Donahue, she worked with Shoenfelt for a short period of time—about eight months. “I met with her every week and sometimes she would come and watch me swim. For the Olympics I  still talked to her by phone and I had printed sheets with me to remind me of our work. Most of the mental skills will come natural now. She helped me focus on the 3 Ps – present, positive, performance – to keep a positive outlook and turn negatives into positives.”

“Swimmers can really benefit from mental training. There are some people who are great in practice but at a big meet they psych themselves out; or they are very negative at practice and that impacts the entire team,” Donahue added.

“I used the tools, didn’t get nervous and knew how to calm myself down. I realized compared to my friends at practice, I was the calmest.” She recognized her weak areas and addressed them using the tools practiced with Shoenfelt. “When I would warm up, I would think about how I don’t feel good and look at things that didn’t matter, like other athletes that were in better shape,” said Donahue. “But what I learned was to not focus on them because that stuff didn’t matter. I thought about what I could control and focused on myself. Sport psychology should be part of every college program—it should be considered the norm.”

A CLOSER LOOK AT HOW MENTAL SKILLS TRAINING HELPED DONAHUE

With the approval of Donahue and her coach, Shoenfelt shared some of her techniques—information that is typically confidential between an athlete and his or her sport psychology consultant.

“One of the important things for Claire was her ability to separate the context from her task. The context is all of the potentially distracting things in the environment. The task is to swim 100m – the same task she has performed successfully a thousand times,” explained Shoenfelt. “During the Olympic Trials she was able to focus really well in the preliminary round and swam a personal best of 57.83 seconds – the second fastest time of all the women in the 100m fly trials. That carried through during her Olympic performance individually, on the Gold Medal relay team, and continues today as she competes internationally for USA Swimming.”

Perfecting Practice
“Her practices leading up to the Trials were extremely demanding. So, our first focus working together was to help Claire remain motivated during these grueling practices.” Shoenfelt shared those important details:

Performance Focus
Additionally, Shoenfelt worked with Claire on the performance components of her swim:

Mental Toughness Training
Finally, the focus on teaching mental toughness skills was another important component of the preparation:

By The Association for Applied Sport Psychology Public Relations Office