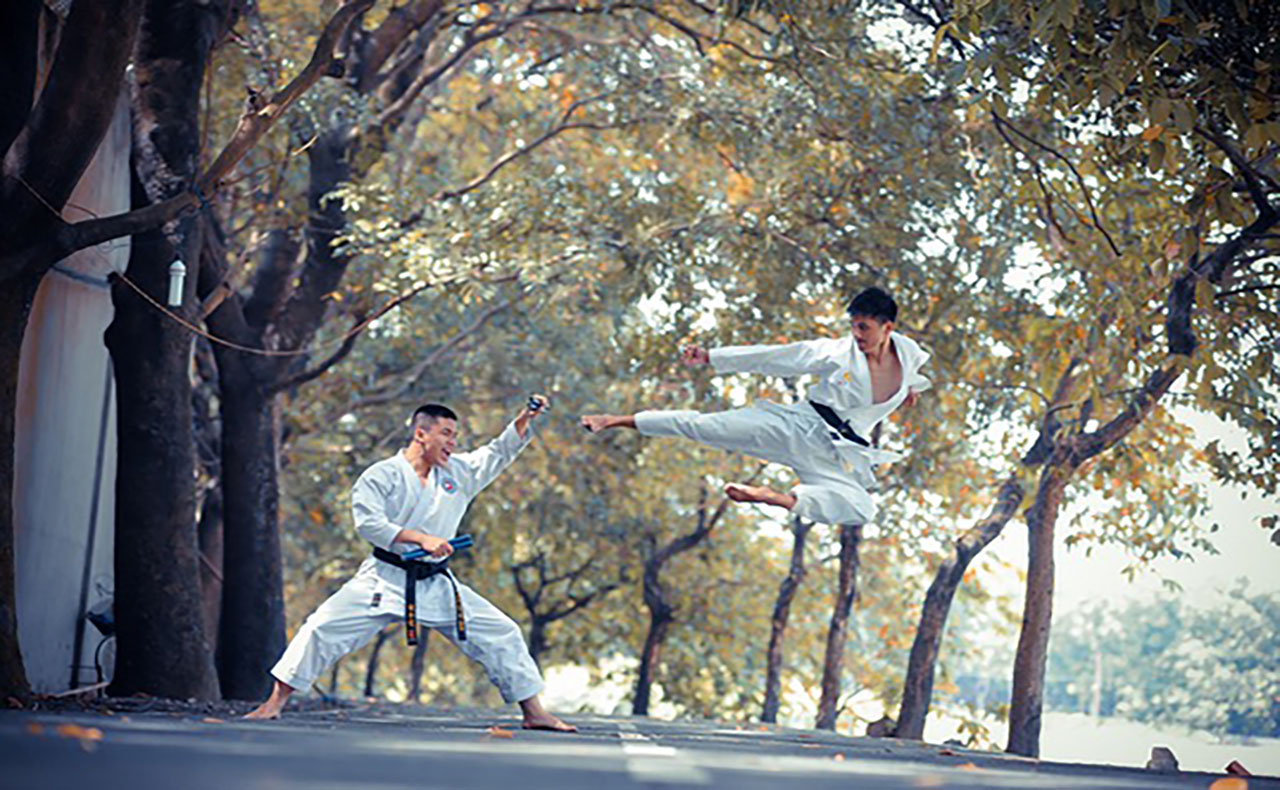 In a study with 200 martial artists, we found those who were trained to use a combination of cognitive specific imagery and motivational self-talk significantly reduced their reaction times almost instantly (Hanshaw & Sukal, 2016). In fact, some participants experienced a decrease in response time of over 20%, or going from striking a target in 0.737 seconds to 0.659 seconds on average. In the ring, this means seeing an opening and striking the open body part faster as well as increasing the likelihood of making contact. Many martial artists believe that response time, even hundredths of a second, is often the difference between victory and defeat.

In the study, the cognitive specific imagery, or “movie,” many of the participants created included seeing their foot strike the target at the exact moment the light on the researcher’s timer illuminated. Participants also selected motivational self-talk cues, such as fast, explode, and strike, and utilized them during their imagery.

Interestingly enough, many control group participants had slower response times when they were tested post-intervention. This means the group who did not receive any training or instruction on mental skills actually became slower. Additionally, the control group experienced a more anxiety, as evidenced by statements such as, “I actually felt nervous” and “I kept thinking about my kick needing to be faster.” These suggest that control group participants tried to excessively control their kick rather than just being in the moment and letting it happen.

Many athletes already use some type of imagery or self-talk, but often run a huge risk of degrading their performance because they leave the content or quality of these skills up to chance. With a better understanding of these tools, sport psychology professionals can match a specific type of imagery and self-talk to the needs or desires of the athlete to improve performance.

How to use cognitive specific imagery for faster response times

The key to imagery with this objective is for athletes to be in total control of the “movie” they play in their heads. They can make their movie more amazing than any Hollywood film by tailoring what they mentally experience to a specific situation and making it as realistic as possible. It’s also important for the movie to be individualized and meaningful to the athlete. For example, a soccer player could practice seeing himself taking a successful shot at the goal at the moment an opening appears.

Vividness and controllability of the imagery are two methods to help athletes become more successful with their practice. Think of vividness as how sharp and detailed the athlete experiences the imagery, which in turn creates more of an emotional connection to the imagined experience. This connection helps athletes to “feel” the scenario by incorporating all of their senses and to regulate their emotions prior to stepping into a competitive environment.

Controllability is the athlete’s capacity to control or make changes to the imagery as it is plays back in his/her mind. This component is useful in helping athletes practice overcoming mistakes and reacting to unexpected situations. These situations can be any adversity an athlete may face in competition, such as perceiving that a referee made a bad call. Athletes can see how they might naturally react and then practice controlling how they will respond in a game if this happens, such as pausing to recover, recognizing the call is out of their control, and focusing on the next play. By mentally making and practicing these choices, it helps athletes respond effectively in actual situations, faster.

How to use motivational self-talk for faster response times

Researchers (Edwards, Tod, & McGuigan, 2008; Masters & Maxwell, 2008) have found that to gain the maximum benefit from motivational self-talk, athletes should:

What we say to ourselves and experience in our minds matters in sport.  We can leave this dialogue up to chance or we can take a more purposeful approach to improve our performance. I would advise any athlete or coach to take calculated steps to create their own “movie” and motivational thoughts. Think of imagery and self-talk as food for the mind. What type of food will fuel your mind and prepare you to perform at your best?

George has a doctor of psychology degree in sport and performance psychology. He conducts research in the areas of imagery, self-talk, and mindfulness. Currently, he also consults with multiple youth soccer teams and semiprofessional soccer teams in Southern California as well as with International Sport Achievers to help improve the physical performance of taekwondo athletes with evidence-based mental strategies. His larger goal is to bring evidence-based practices to help all athletes in any endeavor they choose to pursue.